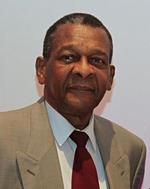 Retired Businessman, Real Estate Broker, Tax Consultant, Accountant, Jean Karl Lubin, after a long and brave battle with cancer passed away on Saturday, March 27, 2021 at Gulf Coast Hospital in Fort Myers, Florida.
Born on November 27, 1945 in Port-Au- Prince, Haiti, to Jacques Lubin and Adeline Exumé, young, handsome, tall with hazel eyes, Jean Karl Lubin enjoyed life in Port-Au-Price as the oldest brother and scholar on both his father’s and mother’s side of the family.
He is survived by his humble, faithful and lovely wife Josiane Lubin for 44 years, his 3 children: Jack Anthony Lubin, Dr. Farah D. Lubin and MacArthur George Lubin. And his daughter-in-law Carline Nazaire-Lubin. His grandchildren: Kaleah Judea Lubin, Amber Carmelle Lubin and Karl Lucas Lubin. His siblings: Pierre J. Lubin, Gerald P. Lubin, Chantal Lubin Dragon, Jean-Philippe Lubin, Ernst Exumé, Michelet Exumé, Marie Ostane Exumé. Marise Exumé, and Joël Exumé had preceded him in death. And his sister-in-laws: Gilberte Lubin, Carole Lubin Pady and Carlyne Exume. And his brother-in-law: Crispin Dragon, Jr. In addition, his parents had also preceded him in death. And his former wife Rosita Mainville who resides in Florida.
Jean Karl Lubin a man of peace, simplicity with great “savoir faire”, dedicated his entire life to his wife and children, as well as to his job and businesses. He attended Lycée Toussaint Louverture in Port-au Prince, Haiti and after his baccalaureate, he pursued his higher education at Damien and Agriculture Major. He also pursued other areas of higher education which included Business Accounting and Real Estate.
The young Jean Karl Lubin applied this education by initiating his career as an accountant at Ford Company for over 20 years in New Jersey. The more mature Jean Karl Lubin became a businessman and established his own Real Estate office in Brooklyn, NY.
Later, after his retirement, he moved to Florida with his wife. He refused to slow down in his business career until he was physically incapable of doing so.
Deepest sympathy to his immediate, extended family and friends affected by his departure, particularly: aunts, uncles, nieces, nephews, great nieces and nephews, cousins, and great cousins, godsons and god daughters and faithful friends.
His passing leaves behind a great void in the lives of his family, friends and the community where he served respectfully and faithfully. However, there is comfort in the fact that Jean Karl Lubin, is resting in the Lord and awaiting that great day of resurrection and the celestial reunion.

The Lord is my shepherd; I shall not want.

He maketh me to lie down in green pastures: he leadeth me beside the still waters. He restoreth my soul: he leadeth my me in the paths of righteousness for his name’s sake.

Yea, though I walk through the valley of the shadow of death, I will fear no evil: for thou art with me; thy rod and thy staff they comfort me.

Thou preparest a table before me in the presence of mine enemies: thou anointest my head with oil; my cup runneth over.

Surely goodness and mercy shall follow me all the days of my life: and I will dwell in the house of the Lord forever.


The Lubin family would like to take the time to thank all of your loving acts of kindness and expressions of sympathy during our difficult time of sorrow. Your flowers, nourishment, telephone calls and prayers have comforted us. Your thoughtfulness has given us strength to endure our loss. God bless you all.

All rights reserved. This obituary is also archived at obittree.com